My Gordon family history can be traced with certainty back to the East Jersey Colony in the late 1600's. Beyond that, the link back to Scotland has not been proven yet, but it is fairly certain that our Scottish ancestor came from the branch of the family known as the Gordons of Pitlurg, from the area near Aberdeen. This story then tells the approximate descent of that branch from the earliest known Gordon in the British Isles down to Robert Gordon, laird of Pitlurg.

There are many interesting tales to tell of our ancestors in the country where our family name originated. Scotland has a long and fairly bloody history, especially in her relations with England, and many of our early ancestors were deeply involved in these conflicts. There was also a lot of internal strife -- as one Englishman put it, "rarely do the Scots allow their kings to die peacefully in their beds."

Most of this earliest history of the family has been taken from the book History of the House of Gordon, VXIII Vols. by Edward Gordon of Cairnfield, published in the late 1800's. Its accuracy is not known for certain, but the story is certainly plausible.

Although some say that the family name came from that of the parish in Berwickshire where some early Gordons held land, it is also held that it was the other way around: the parish took its name from the family. The name Gourdon (with various other spellings) was known in France at least as far back as the time of Charlemagne, when there was a John, Duke de Gordoun, who was created High Constable in 790.

According to this history, the first Gordon in the British Isles was Adam de Gordon who came over from Normandy and assisted Scottish King Malcolm Canmore in his overthrow of the usurper Macbeth in 1057. Note that this was actually before the Norman invasion of 1066. It was at this time that Adam was given the historical family lands in Berwickshire that they held for the next three centuries. Later, in 1093, Malcolm invaded England and was defeated and killed near Alnwick; Adam also perished in this battle, but fortunately left at least one son, also named Adam.

The second Adam Gordon (an oft-repeated name for several generations) died in the Battle of the Standard in 1138, leaving behind two sons: Adam and Richard. Richard's children for the next three generations were Thomas, Thomas, and Alicia. A bit more is known about Adam's descendants. He had a son Alexander, who had two sons William and Adam. The sons both attended the 8th Crusade in about 1270, during which William died near Tunis.

Adam died soon after this, but left his own son Adam, who was married to his 3rd cousin Alicia Gordon, mentioned just above. This Adam Gordon also participated in a Crusade, joining Louis IX of France. However, he died some time before reaching Palestine. His son was yet another Adam Gordon, who had been born in about 1255.

It was in this Adam's time that the conflicts between Scotland and King Edward I of England, self-proclaimed "Hammer of the Scots," began. The Gordon lands, being in the Berwickshire border area, were plundered during one of Edward's early invasions of Scotland. A family legend has it that Adam fought in single combat with Edward "Longshanks" Plantagenet and that the battle ended in a draw. In any case, the early conflict culminated in the Battle of Dunbar on April 28, 1296, during which Adam was killed. This now brings us to the next Adam Gordon, who was the first of the Gordons to be verifiably recorded in Scottish history.

Adam was born about 1280 and was the head of the Gordon clan through the late 13th and early 14th centuries. He was a contemporary of William Wallace (of "Braveheart" fame) and of Robert "The Bruce" (King Robert I of Scotland). This was a time of great upheaval, and the conflicts with England that started at this time continued sporadically for the next 400 years.

Like many other families of Norman origin in Scotland, Adam Gordon owned lands in both England and Scotland. Under the feudal system, these lands were "owned" only in the sense that the king (who was the actual owner of all lands) granted them to the particular barons. In other words, the king could rescind the use of the lands almost at a whim.

When Edward I claimed the right to rule Scotland, due mainly a dispute over the succession to the Scottish throne, William Wallace and later Robert Bruce began leading an organized resistance to the English presence. The Scottish nobles, however, were split in their loyalties as many did not want to lose their English estates. Adam Gordon remained loyal to Edward I in the early years of the conflict. He was apparently able to maintain good relations with both sides, as his name is mentioned in the history books as acting occasionally as an envoy between Edward and Bruce.

Eventually, as the conflict evolved into an all-out war, Adam sided with Robert Bruce and forfeited his English claims. He led the Gordon clan at the Battle of Bannockburn, Bruce’s greatest victory and one of the only decisive victories that the Scots had. Due to a lack of manpower and resources, Bruce generally avoided any set-piece battles with the English, preferring more of a guerilla-style warfare with raids into northern England and on the English-held castles in Scotland. At Bannockburn on June 23, 1314, near Stirling Castle on the Firth of Forth, Bruce’s army of a few knights and many Highlander clans met the might of Edward II’s army. Bruce had the advantage of favorable terrain, and after a fierce battle was able to rout the English and obtain the victory. This led to his recognition as the true King of Scotland. For his assistance, Adam (knighted as "Sir Adam Gordon") was awarded the lands of Strathbogie in Aberdeenshire that became the permanent home of the Gordon clan. If nothing else, this region was far removed from the English border. The estate was later renamed "Huntly" and the chief of the Gordons received the title "Earl of Huntly."

Another significant event occurred on April 6, 1320 when the Scottish nobility affixed their seals to a paper called the Declaration of Arbroath. This declared their rights to freedom from English rule, and in some ways resembles the sentiments expressed in our Declaration of Independence. Here is one of the final paragraphs from this document:

At length it pleased God who alone can heal after wounds to restore us to liberty from those innumerable calamities by our most serene prince, King and Lord, Robert who for the delivering of his people and his own rightful inheritance from the enemies’ hands did like another Joshua or Judas Maccabaeus, most cheerfully undergo all manner of toil, fatigue, hardship and hazard. The Divine providence, the right of succession by the laws and customs of the Kingdom (which we will defend till death) and the due and lawful consent and assent of all the people made him our King and prince. To him we are obliged and resolved to adhere in all things, both upon his right and his own merit, as being the person who has restored the people’s safety, in defense of their liberties. But, after all, if this prince shall leave these principles he has so nobly pursued and consent that we of our Kingdom be subjected to the King or people of England, we will immediately endeavor to expel him as our enemy and as the subverter both of his own and our rights and will make another King who will defend our liberties: for so long as there shall be but one hundred of us remain alive we will never give consent to subject ourselves to the dominion of the English. For it is not glory, it is not riches, neither is it honor, but it is freedom alone that we fight for, which no honest man will lose but with his life.

Not only did Adam sign this document, but he along with Sir Edward Maubisson was handed a copy to deliver to the Pope himself in Avignon, France (this was the period of time when the Papacy was not located in Rome). This is an important document in Scotland’s history in which our oldest Gordon ancestor played a significant part.

After the death of Robert Bruce in 1329 there was again some dispute over the successor since Bruce’s oldest son, David (King David II) was only 5 years old. The fighting against England also continued, but without the earlier success as at Bannockburn. On July 19, 1333, Sir Adam Gordon was killed in the Battle of Halidon Hill, where the English heavily defeated the Scots and retook the city of Berwick.

Adam’s wife was named Marjorie, and it is believed that she was a McDuff. One of their sons (no other children are known) was Adam Alexander Gordon. Not much is known about him other than that he was born in 1285 and died in 1351. He married Margaret Fraser of the nearby Fraser clan.

This Adam’s only known child was John Gordon, born about 1315 in Aberdeenshire. John grew up in those turbulent times, and like his grandfather before him fought for the continuing Scottish cause against the English. This consisted in the 1300’s largely of raids into the northern English counties. On July 22, 1388 he was captured and killed by the English in a major battle near Otterburn in Northumberland while fighting on the side of the powerful Douglas clan. He may have been killed in retaliation for a raid that he had led on the city of Roxburg.

Not much is known about the succeeding several generations except names and dates. This might be a good sign that they lived in more peaceful times, but Scottish history was never really peaceful up until the 18th century. Here are the generations from John de Gordon to the next ancestor of historical interest: 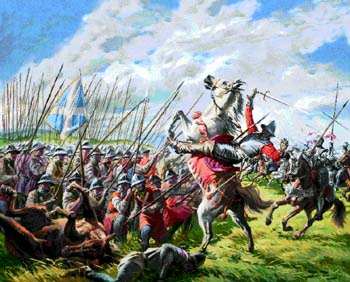