Robert Gordon of Straloch was born in 1580. His family was closely associated with the branch of the Gordons who were titled the Earls of Huntly. He was educated at the University of Aberdeen and later went to Paris to study. After marrying Katherine Irvine in 1608, he purchased an estate in Straloch, Aberdeenshire, where he founded the family that was known as the "Gordons of Straloch." Later he also acquired an estate in nearby Pitlurg after the death of his older brother, John, who had no children. During most of his life he was involved in various affairs of state, and after his death in 1661 he was described as "one of the most worthy and learned Gentlemen of our Nation." 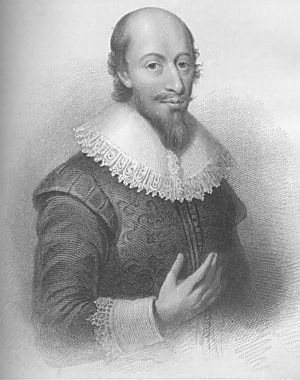 He is best known as an accomplished cartographer, whose works are even today displayed in the National Library of Scotland. Along with his son James, the parson of Rothiemay, he verified and revised the maps that went into the Scottish section of Blaeu’s atlas which was published in 1654, one of the first attempts at an accurate world atlas.

Another of his sons, Arthur, himself had a son named Robert who was born in 1668 (Robert of Straloch’s grandson). He is not one of our direct ancestors, but his life still merits mention here. Robert became a successful merchant, spending most of his career in Danzig, Poland. By the time he returned after retiring in 1720, he used his large fortune to establish a residential school for young boys in Aberdeen. At his death he left his entire estate to this school, which eventually became Robert Gordon’s College and still exists today as Robert Gordon University. This would be an interesting place to look for more records on our Gordon ancestry.

According to the Scottish Dictionary of National Biography, Robert Gordon of Straloch left eleven sons and six daughters when he died in 1681. Besides the ones mentioned above, he also had a son, Robert, that carried on our line.

This next Robert Gordon was born in Straloch in 1609 and died April 18, 1681. He married Katherine Burnet, who also had an ancestry of some interest. Robert and Katherine apparently resided on the family’s Pitlurg estate since that is the stated birthplace of most of their children. Robert was then known as the "Laird of Pitlurg."

It was in the late 1600’s that a Scottish colony was being established in what was then called East Jersey. This was when the town of Perth Amboy was founded. In the mid-1680’s two of Robert’s sons, Charles and Thomas, sailed for East Jersey to stake their claim on land that was available to them. Their story is taken up in the next chapter and here ends the story of our Gordon ancestry in Scotland.

Of course we have many more Scottish ancestors by tracing back on the female sides of the family. As noted above, there were intermarriages with other clans and names of Scottish nobility such as Burnet, Forbes, Fraser, and Stewart. These connections make us descendants of some other very interesting characters in Scottish history. Keep in mind that the following is all somewhat speculative, as the old family genealogies are notoriously unreliable in their attempts to show links to famous families and "royalty". 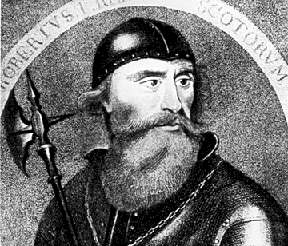 The most famous of these is Robert "The Bruce" himself. We may actually be descended from him along several different paths. His daughter by his first wife was named Marjorie. She was the mother of Robert Stewart who became King Robert II and was also the progenitor of the line of Stewart (Stuart) kings and queens of Scotland and England. Some Stewart descendants also married into the Gordons along the way. Bruce also had a daughter named Isabel by his second wife, Elizabeth de Burg. Isabel’s descendants married into the Forbes family and eventually into our Gordon line. There are also several other connections of this kind.

Another person associated with Robert Bruce from whom we are descended was Archibald Douglas of the powerful lowland Douglas clan. Archibald’s brother, Sir James Douglas, was Bruce’s chief lieutenant and was with him on all of his major military exploits. Together with Archibald and the rest of the clan they were know as the "Black Douglases" whose name struck terror (with good reason) in the hearts of the residents of the northern English counties. They were violent men in violent times. Archibald himself was killed in the same battle at Halidon Hill as was Adam de Gordon.

In 1629 when Robert Bruce was on his deathbed, one of his dying wishes was that his bones were to be buried in Scotland, but that his heart should (literally) be buried in Jerusalem to atone for his unfulfilled vow to go on a Crusade to the Holy Land. After his death, his heart was actually removed and placed into a small lead casket which was then given to James Douglas to carry to its final resting place. However, James was killed in Spain while doing battle against the Moors. The heart was eventually recovered and returned to Scotland where it rests to this day in Melrose Abbey.

The Bruce connection gets even stronger when we consider that at the Battle of Bannockburn he had three main captains: Walter Stewart, Thomas Randolph, and James Douglas. We can show our descent from all four of these great Scottish leaders. From Robert Bruce we can trace back through six generations of paternal ancestors (all but one also having the name Robert Bruce) to Adam de Brus who came to England from Normandy with William the Conqueror in 1066. Bruce’s great-grandfather also married Isabel of Huntingdon who was the great-granddaughter of King David I. From this connection, we can claim descendancy from a long line of early Scottish kings, going back well before the Norman invasion to the old Celtic culture. Some significant persons along this line include:

The farther back we go, the murkier the reliability of the information gets, but the records do go back quite a bit more. The earliest ancestor in this line that we currently have a documented connection to is Hugh II, King of Dalriada. Dalriada was a kingdom that comprised the northwest of Scotland including the major islands. It was settled by a tribe of Celts called the Scots who came from Northern Ireland and eventually pushed out the native Picts. This kingdom maintained ties for a time to Ireland, but the Scots later became more independent and their name was eventually given to the entire country. Hugh reigned as king there until about the year 687, which takes our known ancestry possibly back to the 7th century A.D. That’s an astounding distance from us -- about 43 generations -- and quite a long line of interesting and historic people.